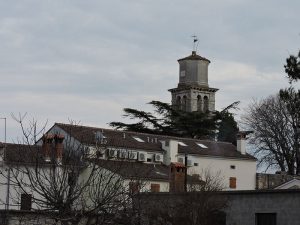 A picturesque medieval village acropolis in Istria, in the southern part of eastern Istria, 218 inhabitants, located above the Rasa river valley, on the road Pula – Labin – Rijeka, 27 km from Pula and 18 km from the Istrian Motorway.

The center of the Municipality of Barban, which has access to the Rasa Bay, covers an area of 100 km2 and has a population of 2715. Besides Barban, in the beautiful greenery of Barban are located some 73 villages and hamlets.

Barban toponym is from the ancient existance, it’s a sectional placename, and gets its name from the Roman family Parpanus. But the archaeological evidence of ancient settlement weren’t founded.

The first written historical data that mentioned Barban are from the year of 734. The document in which Pope Gregory III ordered Callisto, the Patriarch of Aquileia to return the city Patriarch Anton he’s islands Centenario and Morsiano, mentions the monastery of St. Marija of Barban. (Pietro Kandler, CDI, I, 38, str. 83.)
An important historical document is the one from February 10th 1199, in which it is mentioned the conflict of Pula commune and Barban. It states that the prefect Pribislav from Barban in the presence of earl Hengelpart reached an agreement with Podesta Rugeri from Pula, and he pledged to give Pula commune a quarter, to prosecute criminals and to be subjected to the Pula court. (Bernardo Benussi, Pula’s history in light of the municipal institution until 1918, Local Copies “Žakan Juri”, Pula, 2002)

During the Middle Ages Barban was a feudatory of Patriarchate of Aquileia, which was managed by the Earls of Gorica. After the death of the last Earl Albert IV, Barban goes into Habsburg hands. Barban surrendered to Venice in 1516. Venetians gave Barban at the auction, and with the agreement from December 23th 1535, Barban and Rakalj were sold to the famous Venetian family Loredans for 14760 coins.

Ambushers devastated him in 1610 and 1612. Mercury Glagolitic tradition (graffiti, signs, liturgy, institution of prefects, Istrian divorce) shows distinctly Croatian ethnic characteristics, although at the end of Venetian reign assimilation processes had occured under the influence of the Italian language and culture.

In 1805 in the war with France, Austria ceded the Venetian part of Istria that annexed to the Napoleonic Kingdom of Italy. After the French were defeat in 1815, with the decision of the Vienna Congress Istria was assigned to Austria, under whose rule lasted until the end of World War 1st in 1918.
Barban has a lot of monuments and attractions: 4 Churches (parish church of St. Nikola – was built in 1701, in Baroque, instead of the old, smaller church in less Romanesque style; the church of St. Jakova the Apostle; St. Antun the Great; the Church of Mother Mary of the Valley); the remains of the city walls: Large front door (Western, built in 1718), then the Small door (eastern, built 1720) with a beautiful segment of defensive walls (built 1555); city tower with extremely wide walls, which confirms that Barban was a well established town in the Middle Ages; Glagolitic inscriptions in the church of St. Antun and Glagolitic graffiti at St. Jakov church; antique inscriptions from the 1st century AD, the porch (the clock tower was destroyed in 1944) as part of the old square and Loredan Palace (built in 1606); frescoes from the 15th century in the church of St. Jakov the Apostle (work of master Ivan from Kastav) stone baptistery; Gothic Custody of the 15th century (the work of artist Dominik from Koper) and a wooden statue of St. Nikola parish church; images on altars in the church of St. Nikola were made by the students of Palma Junior (1544-1628), student Ticianov; frescoes on the interior walls and a pointed out of ceiling from the beginning of the 15th century church of St. Antun, etc

Well preserved buildings from the Baroque and Gothic, frescoes and Glagolitic inscriptions, churches, palaces, city walls and game of the knights the Race of the Ring, make Barban extremely attractive destination for those interested in cultural and historical heritage.

At the center of the village there was a castle (citadel, fortress). It was consisted of a dozen buildings, all of those, along with a warehouse and a church were surrounded by the wall. The towers were raised within the walls. Outside the castle was a city lodge.

In the year of 1701 on the place of an earlier church, it was bulit a considerably larger church of St. Nikola. At the site of the present baptistery there used to be a tower of the castle, and the sacristy is located where previously was the second tower.

The walls of the castle (which is the left wing of the building next to the church) were destroyed in the 14th century, but restored by the captain Capello in 1606.

Barban is full of Glagolitic graffiti. In the St. Antun is written how Venice took the whole Istria in 1508 «And so the gentlemen have captured the whole Istria». Conflict between Venice and Austria that ocurred during these years is mentioned in graffiti in Rakalj and Hum. In Barban is a record from 1587 «The grain had wither», and graffiti in St. Jakov mention how at that time Barban was captured with heavy shortage of grain and oil. St. Antun is hiding a record of great bloodshed in Barban and record that Baldasar Polderstan left in 1491, and priest Vid, son of Pavle from Lika (1453).
Illiterate used to rip pictures into frescoes instead of Glagolitic letters, so there is a drawing in St. Antun that shows Barban during a ceremony that dates back to the 15th or 16th century. Among the wall drawings can be found and the former appearance of the parish church, and one drawing shows the bearded glagolitic priest.
In the 15th century here in St. Antun was repeatedly signed Bratonja, a farmer from Barban, one of the few of the inhabitants of Istria who knew Glagolitic, but were not priests. One signature was written on May 15th, 1491 (Baldasar Polderstan, then vicekapetan from Pazin – more about him look in the comment of Jerome from August 13th). In Barban is the church of St. Jakov wich was built in the 14th century. There are frescoes from the 15th century, the ones with numerous Glagolitic graffiti.
The most famous is the one «If the heart isn’t praying, in vanity tongue keeps talking» (meaning: if faith is not from the heart, it is a waste of time to repeat the prayers). Graphite was written by Ivan, who after the first graffiti added: «It was written by Ivan, Zile’s son, at the time he was satiated with dry figs».

The wooden sculptures of Barban were made by skillful hands of the sculptors from Ernestinovo and Viskovo. Once they have in 2009 created statues of Barban citizens in traditional clothes – Barban’s traditional costumes, there was an idea to start the sculpture colony in wood in Barban. So in the week before the 37th Racing of The Ring from 13th to 17th of August in 2012, it was held the 1st Colony in wood sculpture “COK”. Mato Tijardovic, the founder of the first and most famous colony of naive sculptors in Ernestinovo, then made a sculpture of Barban horsemen, sculptor Ivica Tolić made a sculpture of Barban’s Communal Guard according to the image (painting) of August Selb 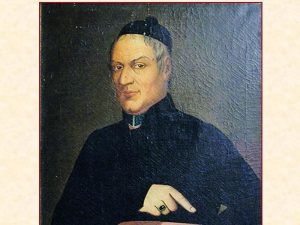 Petar Stanković (Pietro Stancovich) was born in February 24th in 1771. The classicist house of P.M. Stancovich from 1838 is in Barban.

P. Stankovic was a priest, but was also engaged in various areas; archeology, linguistics, had been recording the folk customs, had been dealing with the inventions, zoology, botany, etc. Two of his inventions for processing olives earned him an international reputation as an inventor. He had published 23 books with 3000 pages, but some of his unpublished works were lost. He has left his library of several thousand works in Rovinj which is kept in Rovinj Town Museum titled “Stancoviciana”. In Pula are also numerous of his manuscripts.

In Stancoviciana is a series of manuscripts, translations, lecture notes of philosophy at the seminary of Udine in 1792, volume of physics with forty different technical gadgets, books that he had written by himself on various topics. There is also a series of books about Istria written by different authors from whom he drew his knowledge about Istria and used for writing his own book “Biografia degli uomini Distinti dell’Istria” (“biographies of famous people from Istria”).

Stancoviciana contains and several books on Croatian language, a series of works of classical Roman and Christian writers, old maps, and printing rarities: Aldine – books printed by Aldo Manuzio (1449-1515); Plantin – books printed by Christoph Plantin (1520-1589); elzevieri (books printed by the family Elzevier in the Netherlands in the 17th century); books printed in Venice in the early 16th century at the printer family Giunta; book published in France in the second half of the 18th century in the printing family Didot.

Pietro Stancovich argued among other things that the St. Jerolim was from Istria, what is now assumed by a number of experts. He corresponded with many intellectuals from Italian and Croatian circle outside Istria.

Replica of the earrings made as indigenous souvenir after the autochthonous piece of jewelry that was worn in Barban in the 11th century.

“Barbanski rančin” is an earring which was found in Gradina near Barban, and it belonged to the dress of the old Croatian population inhabiting Barban region during the reign of the Roman Empire.

The earring from Barban is enscribed on the Register of Cultural Goods of the Republic of Croatia and the specimens are kept in the Archaeological Museum of Istria in Pula.

We're not around right now. But you can send us an email and we'll get back to you, asap.

You can find out more about which cookies we are using or switch them off in settings.

This website uses cookies so that we can provide you with the best user experience possible. Cookie information is stored in your browser and performs functions such as recognising you when you return to our website and helping our team to understand which sections of the website you find most interesting and useful.

Strictly Necessary Cookie should be enabled at all times so that we can save your preferences for cookie settings.

If you disable this cookie, we will not be able to save your preferences. This means that every time you visit this website you will need to enable or disable cookies again.